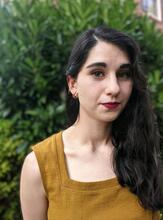 Micah Khater is a Ph.D. Candidate in the Departments of African American Studies and History. Her dissertation “Unable to Find Any Trace of Her”: Black Women, Genealogies of Escape, and Alabama Prisons, 1920 - 1950 is a social and cultural history of Black women’s attempts to run away from prisons, police, and jails. In it, Khater maps Black women’s fugitive geographies in the context of a burgeoning carceral state and the enduring cultural impact of escape on Black life in Alabama. By interrogating the specific strategies that incarcerated Black women used to run away, she demonstrates that escape was not monolithic. Instead, Khater argues that running away challenged different modalities of twentieth-century carceral punishment. By tracing escapes from sites of penal labor to the quotidian places made into sanctuaries, she elucidates how Black women’s fugitivity forced the state to constantly redraw the borders of carceral power. And in doing so, Black women not only disrupted modern carceral punishment, but they also challenged administrators’ use of technologies that survived the abolition of slavery. By running away, Black women reclaimed a different kind of antebellum past than that which stalked the grounds of the prison: one that located freedom in Black genealogies of escape.

Khater is also at work on Amrika: A History of Arab Americans under advance contract at Cambridge University Press. Co-authored with Dr. Akram Fouad Khater, Amrika is a long history of Arab and Arabophone people in the United States that charts the political and social formations of immigrant communities as they reckoned with race, gender, sexuality, labor, religious transformation, empire, and diasporic longing.

In addition to scholarship, Khater’s poetry and prose have appeared in Sukoon and Taos Journal of International Poetry & Art. In 2019, she was a finalist for the Black Warrior Review fiction contest. Her short fiction and poetry have been accepted into workshops at Tin House, Winter Tangerine, and The Speakeasy Project.