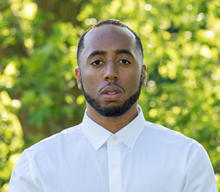 Philip V. McHarris is a joint PhD candidate in Sociology and African American Studies at Yale University. Philip’s main areas of research include race and ethnicity, housing, policing, and inequality. His current research focuses on the experiences of residents of a high-rise public housing development in Brooklyn, NY as they navigate concerns surrounding safety, policing, building conditions, and cycles of poverty.

In another line of research, Philip examines the causes and consequences of the large-scale expansion of policing in the United States since 1965 and the strategies that communities employ to challenge police expansion and end police violence. Philip draws on qualitative and quantitative methods throughout his research.

In addition to his scholarly work, Philip has written for outlets that include The New York Times, Washington Post, and Slate. His commentary has been featured on HBO, CNN, TIME, and PBS. Philip is a recipient of the Ford Foundation Predoctoral Fellowship and the NSF Graduate Research Fellowship. He received his B.A. in Sociology from Boston College.