In his introduction to William Pickens’s narrative, Bursting Bonds: The 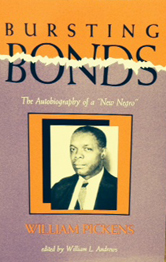 Autobiography of a “New Negro,” the literary scholar William Andrews wrote: “When Bursting Bonds was first published in August of 1923, its author, William Pickens was a nationally recognized African American leader, one of the half-dozen best-known black men in his time.”

Pickens, the son of liberated slaves, came to Yale University having already earned a B.A.in 1898 at Talladega College, Alabama. He graduated from Yale with a second B.A. degree in classics in 1904, a Phi Beta Kappa graduate. He helped organize the Louisville branch of the NAACP, and after a career in academia, became NAACP field secretary. During his tenure (1920–1942) the number of NAACP branches grew to more than 350. Pickens later became an employee of the U.S. Treasury Department, traveling across the United States in, urging the sale of U.S. Savings Bonds.

Richard Yarborough, another leading literary scholar, wrote: Bursting Bonds serves as a counterpoint to what has come to be widely considered the paradigmatic post-Reconstruction autobiography, Booker T. Washington’s Up from Slavery…. [Pickens’s narrative] provides the modern reader with a fascinating consideration of the complex challenge of being a black intellectual between Reconstruction and World War I.”