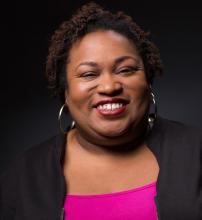 Thursday, October 26, 2017 - 11:45am to 1:45pm
African American Studies Dept. See map
81 Wall St., Room 201
Brittney Cooper is a newly tenured Associate Professor of Women’s and Gender Studies and Africana Studies at Rutgers University. She teaches courses on Black feminist theory, Black Intellectual Thought, Hip Hop, Gender and Media.
Cooper is a widely sought-after public speaker at universities throughout the country and an in-demand commentator for radio, podcasts, and television.  Her work and words have appeared at MSNBC, BET, NPR, PBS, the New York Times, the Los Angeles Times, TV Guide, New York Magazine, Salon.com, The Root.com, and Al Jazeera America, among many others. She is a regular contributor at Cosmpolitan.com and co-founder of the Crunk Feminist Collective and blog. Cooper is the author of Beyond Respectability: The Intellectual Thought of Race Women (University of Illinois Press 2017) and the forthcoming ELOQUENT RAGE: A Black Feminist Discovers Her Superpower  (St. Martin’s Press 2018) and co-editor of the recently released, The Crunk Feminist Collection (The Feminist Press 2017).
She is also the recipient of numerous awards for her research, teaching and service. In 2015, the journal African American Review awarded her its Darwin T. Turner Prize for the top journal article in any time period in African American Literature or Culture. In 2016, she was awarded the Northeast Council of Graduate Schools Excellence in Teaching Award for Masters Level Instruction. In 2016, she was also awarded the Olga Vives Award from the National Organization of Women and awarded the Top Blogger Award by the NewsWomen’s Club of New York. And In 2017, she was awarded the Black Feminist Waymaker and Shapeshifter Award by Black Women’s Blueprint, Inc. In 2017, she was named to the Root.com’s Root 100.