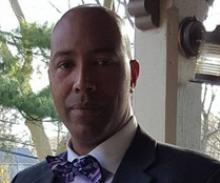 Chris Lebron is Assistant Professor of African American Studies and Philosophy at Yale University. His interests include moral theory, political ethics, race, and method. His book, The Color Of Our Shame: Race and Justice In Our Time, was published by Oxford University Press in August 2013 and was awarded First Book Prize by the American Political Science Association Foundations of Political Theory section. His article, “The Agony of a Racial Democracy,” was published in Theory & Event, vol 15, no. 3, 2012, a symposium on the shooting of Trayvon Martin. His article “Equality From A Human Point Of View,” was published in Critical Philosophy of Race, vol 2, no. 2 2014. His paper, “Thoughts on Racial Democratic Education and Moral Virtue,” was published in Research & Theory in Education, vol 13 no. 2 (2015). Chris has completed his second book, The Making of ‘Black Lives Matter’: A Brief History of an Idea, which will be published by Oxford University Press in 2017. His third book on imagination, ethics, and racial egalitarianism is currently in progress.