Exploring the Rise and Fall of Paramount Records 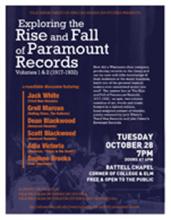 **Battell Chapel is wheel chair accessible from Temple St.,(which is about a half block from the corner of Temple and Elm)

Enter Old Campus on Temple St., going through the wrought-iron gateway, and turn right on the pathway toward Elm St. to enter the rear of Battell Chapel.

The program will feature a dynamic conversation between roundtable participants and highlight a profound listening experience as each participant plays a selected song in its entirety and discusses its deeper implications and dimensions.

Paramount Records was founded on a modest proposition: produce records as cheaply as possible, recording 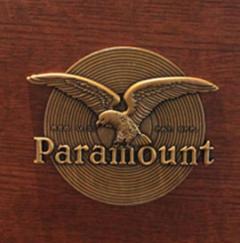 whatever talent was available. Over its lifetime (1917-1932), the label compiled a dizzying array of performers still unrivaled to this day, spanning early jazz titans (Louis Armstrong, Fats Waller), blues masters (Charley Patton, Skip James), American divas (Ma Rainey, Ethel Waters), gospel, vaudeville, hillbilly, and more.  But how did a Wisconsin chair company, run by men with little knowledge of their audience or the music business, build one of the greatest musical rosters ever assembled under one roof? How and why were its fortunes directly linked to the Great Migration, and what is Paramount’s legacy today?