Film screeninig: “I Am Not Your Negro” 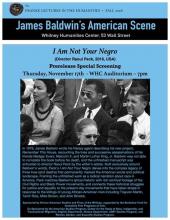 The documentary film, I AM NOT YOUR NEGRO, is based on James Baldwin’s unfinished–and final–book manuscript, Remember This House. In that work, Baldwin planned to re-think the history of the Civil Rights Movement in the wake of the assassinations of Martin Luther King, Jr., Malcolm X, and Medgar Evers.  Director Raoul Peck works with the manuscript and extends it–visually and narratively–to loop our present-day racial crises with those murders that, as Baldwin put it, “shook my world.”

Here’s a link to the film’s trailer: http://www.magpictures.com/iamnotyournegro/trailer

This film is garnering praise at festivals worldwide; the NY Times’ Manhola Dargis calls it “the very best film you’ll see all year.” It’s not slated for release until February 2017, so this is a special chance to see it in advance. It’ll be worth your time.