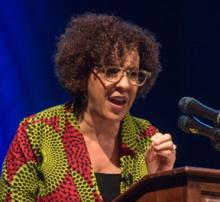 P. Gabrielle Foreman has published extensively on issues of race, slavery and reform in the nineteenth century with a focus on the past’s continuing hold on the world we inhabit today.

Foreman has a long-standing commitment to the intersection of digital technologies, race and public history. She is the founding faculty director of the Colored Conventions Project, which since 2012 has made digitally available six decades of Black political organizing that overlapped with and was obscured by the abolitionist movement. The project has involved over 1000 students across the country in undergraduate research through its curriculum adopted by the Project’s national teaching partners while launching a transcription project recognized alongside those by the British Library and the Massachusetts Historical Society. She is currently completing The Art of DisMemory: Historicizing Slavery in Poetry, Performance and Material Culture and a co-edited volume (with her graduate students), Colored Conventions in the Nineteenth-Century and the Digital Age, linked to digital exhibits for the public, which will be featured on www.ColoredConventions.org.