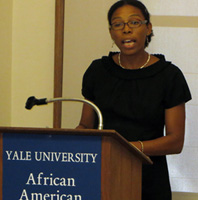 An associate professor of African American Studies and American Studies, Feimster was chosen as one among 10 untenured faculty members who have been recognized by administrators, and students, for outstanding achievement in teaching. The prize carries with it an award of $5000 for each faculty member.

In a letter to Feimster, Provost Ben Polak noted his conviction that “nothing we do is more important than the the teaching and research carried out by our faculty.” Polak thanked Feimster for “contributing to high pedagogical standards” at Yale.

Crystal Feimster’s teaching excellence has also been acknowledged by another important honor: she was awarded the distinguished Poorvu Family Award for Interdisciplinary Teaching in Fall 2013.