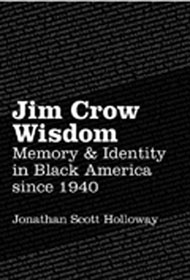 The Before Columbus Foundation announced that among the winners of its thirty-fifth American Book Awards this year is Jim Crow Wisdom: Memory and Identity in Black America since 1940, by Jonathan Holloway,  Dean of Yale College and professor of History and African American Studies. Holloway, and the other 2014 American Book Award winners, will be formally recognized on Sunday, October 26th from 2:00-5:00 p.m. at the SF Jazz Center, Joe Henderson Lab, 201 Franklin Street (at Fell), San Francisco, CA.

The American Book Awards were created to provide recognition for outstanding literary achievement from the entire spectrum of America’s diverse literary community.  The purpose of the awards is to recognize literary excellence without limitations or restrictions.  There are no categories, no nominees, and therefore no losers. The award winners range from well-known and established writers to under-recognized authors and first works. There are no quotas for diversity, the winners list simply reflects it as a natural process. The Before Columbus Foundation views American culture as inclusive and has always considered the term “multicultural” to be not a description of various categories, groups, or “special interests,” but rather as the definition of all of American literature. The Awards are not bestowed by an industry organization, but rather are a writers’ award given by other writers.