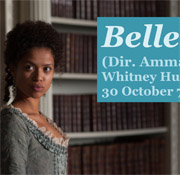 Jamicia Lackey, graduate student in African American Studies and Film Studies, Yale, will participate in a panel discussion following the screening of the film, “Belle,” on Thursday, October 30, 2014 at the Whitney Humanities Center. The screening begins at 7pm.

Inspired by the painting “Portrait of Lady Elizabeth Murray,” commissioned by William Murray and attributed to Johann Zoffany, this film focuses on the life of Dido Elizabeth Belle, the daughter of an enslaved African and a British admiral who was raised by her aristocratic great-uncle, Lord Mansfield.

This event takes place in conjunction with “Figures of Empire: Slavery and Portraiture in Eighteenth-Century Atlantic Britain,” and is sponsored jointly by the Yale Film Study Center (courtesy of Paul L. Joskow), The Yale Film Colloquium, and the Yale Centre for British Art.