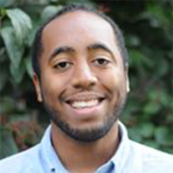 It is never too late to celebrate good news—and the prestigious honors awarded to Philip McHarris (Sociology/African American Studies) are indeed good news worthy of acknowledgement and praise.

Philip received three distinguished honors announced in his second semester at Yale: a Ford Predoctoral Fellowship, administered by the National Research Council (NRC) on behalf of the Ford Foundation, a NSF Graduate Research Fellowship, and an appointment as a Yale ISPS Policy Fellow. Among other accomplishments, these honors recognize Philip for his “demonstrated superior academic achievement,” his commitment to teaching and research, particularly in the sciences at the university level, and his graduate student research on U.S. domestic policy, respectively.

During the summer of 2015, Philip was engaged in scholarly pursuits through another prestigious fellowship awarded to him. Following his first year as a doctoral student at Yale, Philip completed research as a Social Science and Policy Forum Predissertation Fellow for the Summer Institute on Inequality at the University of Pennsylvania. As an SSPF Predissertation Fellow, Philip joined other Fellows to share his research interests with some of the world’s leading scholars doing research on inequality.

Philip McHarris is currently a second year student in the combined PhD program in Sociology and African American Studies. His research interests lie at the intersection of race/ethnicity, urban sociology, inequality, and the criminal justice system.