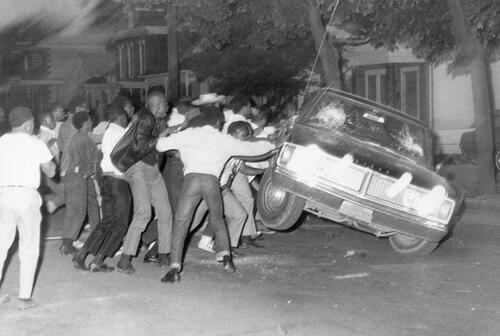 Since the declaration of Martin Luther King, Jr.,’s birthday as a federal holiday, our country has celebrated the civil-rights movement, valorizing its tactics of nonviolence as part of our national narrative of progress toward a more perfect union. Yet we rarely ask about the short life span of those tactics. By 1964, nonviolence seemed to have run its course, as Harlem and Philadelphia ignited in flames to protest police brutality, poverty, and exclusion, in what were denounced as riots. Even larger and more destructive uprisings followed, in Los Angeles and Detroit, and, after the assassination of King, in 1968, across the country: a fiery tumult that came to be seen as emblematic of Black urban violence and poverty. The violent turn in Black protest was condemned in its own time and continues to be lamented as a tragic retreat from the noble objectives and demeanor of the church-based Southern movement. Read More