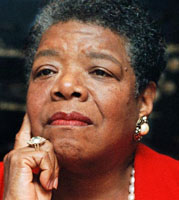 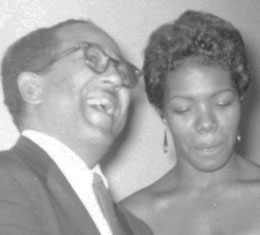 ou, who first captivated readers with her candid autobiography, I Know Why the Caged Bird Sings (1969), and sustained a vitally engaged audience for more than four decades with her subsequent autobiographies, poetry and screenplays, passed away on Tuesday, May 27, 2014.

Among many distinctions and honors she received, Ms. Angelou was chosen in 1992 by then President-Elect Bill Clinton to be the inaugural poet during his swearing in ceremony for the office of president of the United States. In January 1993, Ms Angelou read her inaugural poem, “On the Pulse of Morning.”

A black-and-white photograph of Maya Angelou with one of the poets she most celebrated, Langston Hughes (shown above), is held in the James Weldon Johnson Memorial Collection of African American Arts and Letters (JWJ) of Beinecke Rare Book and Manuscript Library. The JWJ also holds extensive materials on the poet Paul Laurence Dunbar, another poet much loved by Angelou: the title of first her autobiography borrows a line from Dunbar’s poem, “Sympathy.”

Additionally, read:
“In a Commanding Literary Voice, Maya Angelou Sang Out to the World”
by Elizabeth Alexander, MAY 28, 2014

“Maya Angelou taught us how to talk about ourselves”
by Farah Griffin May 29 at 12:26 PM