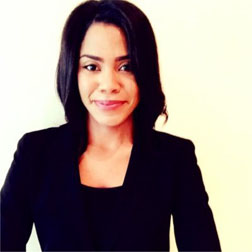 Rizvana Bradley begins her appointment as assistant professor of African American Studies and Film & Media Studies at Yale in the fall of 2017. Professor Bradley received her PhD in Literature from Duke University in 2013, and her B.A. (Highest Honors) from Williams College, where she studied English and Political Theory.  She was a Helena Rubinstein Critical Studies Fellow at the Whitney Museum of American Art Independent Study Program in New York from 2012-2013.  Before coming to Yale, Bradley was as an Assistant Professor at Emory University, and a Visiting Research Fellow in the Department of the History of Art at the University College London.

Bradley is currently at work on two new scholarly book projects. The first is a recipient of a Creative Capital | Andy Warhol Foundation Arts Writers Grant, and offers a critical examination of the black body across a range of experimental artistic practices that integrate film and other media.  The second project examines the relationships between newer forms of experimental film and video practices, and traditional film genres. Recent and forthcoming articles and essays have focused on Black British video artists and The Art of the Moving Image in Britain After 1989 (forthcoming, Yale University Press, 2018); the cinematic development of black dance forms in relation to the critical interrogation of the loss of gesture in the history of cinema (forthcoming, TDR: The Drama Review, MIT Press, 2017); British artist and director, Steve McQueen (Black Camera: An International Film Journal, Indiana University Press, 2015) and the televised 1991 Anita Hill hearings and centrality of black femininity in reimagining the stakes of black embodiment (Rhizomes: Cultural Studies in Emerging Knowledge: Special Issue: Black Holes: Afro-Pessimism, Blackness and the Discourses of Modernity, 2016).