TIME “Trump Declared Himself the ‘President of Law and Order.’ Here’s What People Get Wrong About the Origins of That Idea” 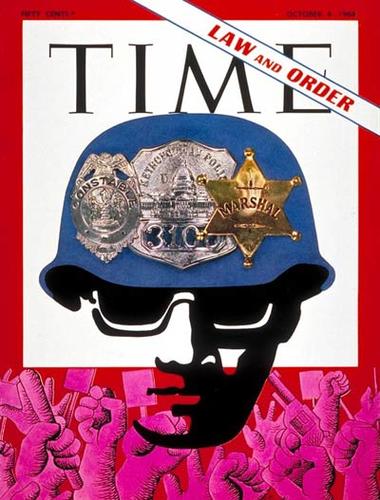 “Back then, following revolts in 125 cities nationwide after the assassination of Martin Luther King Jr. and throughout the mid-1960s, fueled by inequality issues yet to be addressed, Nixon made “law and order” a centerpiece of his platform. “Law and order” might sound simple, a 1968 TIME cover story on the campaign pointed out, but to some it was “a shorthand message promising repression of the black community”—and to that community, it was “a bleak warning that worse times may be coming.”

But Elizabeth Hinton, a historian of U.S. inequality and author of From the War on Poverty to the War on Crime: The Making of Mass Incarceration in America, says the focus on Nixon obscures the real Presidential origins of modern “law and order.” Nixon’s predecessor, Lyndon B. Johnson, shaped decades of policy when his Administration decided to invest more in policing than in social welfare programs — and, as Hinton explains, that history is key to understanding why the issues that sparked the protests over the last week remain unresolved. She spoke to TIME about what to know about that past.”