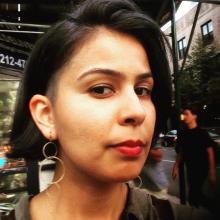 Maryam Ivette Parhizkar is a Ph.D. candidate in the departments of American Studies and African American Studies. Drawing connections between aesthetics, racial formation, possession, and the ethics of institutional knowledge production, her dissertation research is examines the histories of Black, Indigenous, and mestizx performers, musicians, and writers in the context of 20th-century U.S. empire. This study is situated within a longer genealogy of possessive aesthetics and conceptions of the human in Euro-American modernity.  Methodologically, Maryam is interested in the possibilities of listening/attunement, (anti-)biographical writing, relationality, and poetic imagination, and explores these practices in both her writing and teaching.

The daughter of Salvadoran and Iranian immigrants, she is a 2019 CantoMundo Fellow and a member of the U.S. Central American collective Tierra Narrative. She holds a B.A. from Columbia University and an M.A. from the City University of New York Graduate Center.